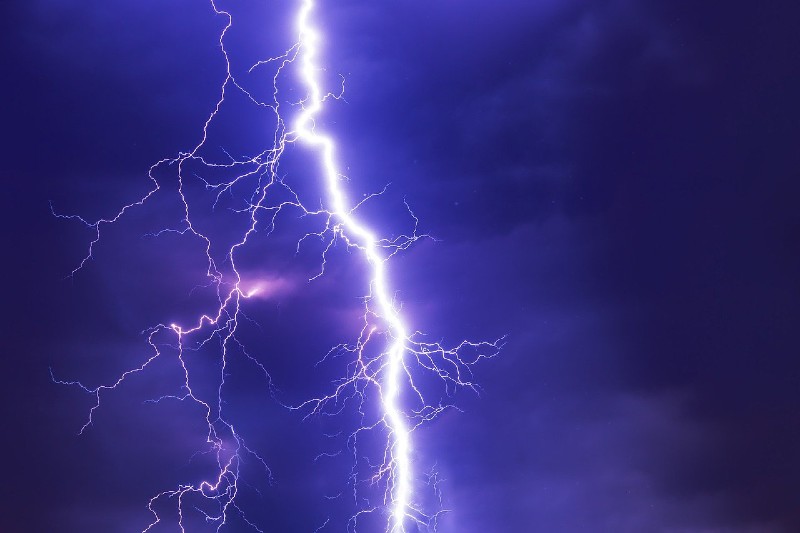 One of the most common questions that we get is do solar panels attract lightning? It’s a good question and it’s understandable why you would want to know.

Contrary to popular belief, no they don’t!

Read on for more information about this myth and what science has found in regards to this claim.

To understand whether solar panels attract lightning or not, first, you need to know how lightning works.

Lightning occurs due to the negatively charged ions in storm clouds. These electrons will build up till they reach the point they overcome the air’s resistance and jump from the cloud to earth. This is called a lightning strike.

But what determines where a lightning strike?

Well, electrons are quite lazy, they always like to take the shortest and less resistant path from the cloud to the positive pole (earth’s surface).

And this is why lightning strikes the tallest object around (e.g., trees, houses).

No they don’t! Scientists have not found any evidence to suggest that solar panels attract lightning and putting solar panels on your roof doesn’t increase the risk of getting hit by lightning.

Further, Solar panels are actually designed to be lightning rods!

They have been engineered by scientists so they do not attract or repel any type of lighting strike because this can do harm to the panel and the surrounding area.

While the racking system is made of metal, it is grounded directly into the ground.

That’s where lightning often strikes first and that would do no harm to your system whatsoever!

Overall, there is a very low chance of a solar panel system being struck by lightning.

The structures are engineered to do so and by using the best materials, it is designed to be a low-risk installation for you.

You will have no issues with your system getting hit by lighting because there’s just too many risks involved in that happening!

If anything does happen though, do not touch anything metal.

Lightning can travel through power lines and that’s how it can cause your system to go into overcurrent, which is quite dangerous!

So just be careful if you do hear thunder because lightning does pose some risk no matter what type of solar panel installation you have at home.

Related article: How To Protect Solar Inverter From Lightning

Can You Install Solar Panels In An Area That Gets Lots Of Thunderstorms?

In fact, if the installation is done correctly with high-quality materials and if the solar panels are installed by a trusted company, then do not worry about this at all!

You can install them and forget about them.

They will do their job silently in the background without harming anyone or anything around them (except for maybe your electric bill).

But do consider where you place your installation because if there is too much risk, do not do it.

You don’t want to take a chance with your safety and the safety of those around you!

Related article: Can I Put Solar Panels On A Mobile Home?

Is It Safe For People With Installed Solar System To Be Around?

In addition to this myth surrounding do solar panels attract lightning, we also get asked if it’s safe for people with installed systems to be around when there are storms.

It is safe, the chances of it being struck by lightning are extremely low approximately one in one million but can happen to anyone at any time.

Therefore, you need to take precautions when there are storms around and avoid being out in the open during a storm. If you do have to be outside then do not touch metal objects or anything that’s grounded into the ground while lightning is striking close by.

Related article: Can You Get Electrocuted From Solar Panels?

How To Protect Solar System From Lightning?

If you do have a ground mount solar panel system at your home, then this is one thing that you do not need to worry about.

It has been engineered for all types of weather conditions and there are precautions in place against lightning strikes.

But if you do have an off-grid or rooftop solar panels installed then take extra precaution during a storm.

Here is how to protect solar panels from lightning:

If your solar panels are not grounded into the ground, do this immediately.

This is often done in newer installations but if you do have older ones then consider getting them re-installed so they can be better protected against lightning.

Grounding also helps to protect the system from power surges and any other type of electrical anomaly that may occur.

If you live in an area with a lot of thunderstorms, then this is something you need to consider installing.

Lightning rods are installed on high-risk installations and they do not do anything while the system is in use (i.e., when it’s raining). But should there be a lighting strike nearby or close by where your installation is located, then this will be diverted away from it.

This significantly reduces the risk of your system being struck by lightning and do keep in mind that not all systems are installed with these, but if you do have one, do consider installing them!

If you do have a very high-end system then this is something that will protect your investment.

Power surge protectors do not prevent lightning from striking but they do reduce the chance of damage being done to it significantly.

In fact, some solar panels can be up to 90% protected against power surges and any other type of electrical anomaly that can do damage.

We do recommend you do research to find out if your system does need a power surge protector or not and if it does, then do invest in one of these!

What Would Happen If My Home Is Struck By Lightning?

When lightning does strike your solar system and cause damage to it, then all you need to do is to contact your insurance company.

And if you do have a claim, then the insurance company will help you with everything to do with getting it fixed as soon as possible so that life can return back to normal for you!

Solar panels are actually designed to be a low-risk installation for you.

There is no need to worry about this myth surrounding do solar panels attract lightning anymore! You can install them and forget about it.

They do their job silently in the background without harming anyone or anything around you (except for maybe your electric bill).

If anything does happen though, do not touch anything metal and avoid being out in the open during a storm with lightning striking nearby or you can get electrecuted!

When lightning does strike your solar system and cause damage to it, then all you need to do is contact your insurance company.

Your homeowner’s insurance policy covers lightning damage to your home!